Once in a while, I get a project which can span over several months and include very varied jobs with a common theme. This particular project was huge; a company rally event which was taking customers across ten countries in seven days…

What an exciting chance to help brand and theme the whole event and create the icons, logos, mascots and literature which would accompany the event! Being able to take a project like this from start to finish is so very rewarding and to see designs come to life is so rewarding, as often once print files are done, this is where my role as a designer ends. Such as task also plays to what and why my company has design, made and bake all under one roof as all my skill sets were utilised here.

Not only was the branding key to this event, there were a lot of corporate identities to also consider. The event needed to compliment the hosting company as well the stand alone branded event.

The imagery used throughout the process was relatively generic due to it being the first event of its kind. A number of the locations being visited also had existing copyright. I therefore chose to create icons and logos which would encompass the whole event in a very simple but impactful way. Once these were established, I then set about the massive task of the travel journals and fundraising packs.

This item was key to the actual event as not only was it a nicety given to participants, it also needed to contain legal country information, addresses, route and meet points. The purpose of the travel journey was to encourage interaction between participants as very few would know each other at the start of the journey. The concept of challenges was born and colleagues worked really hard to bring together games, activities and social media interaction to drive communication throughout the event. As a result, this travel journal needed to be jam packed with information but in a fun and logical manner.

It wasn’t an easy job but was very rewarding seeing it come together. The travel journals themselves contained pull-out long-page maps, infographic “fun country facts” and colour coded sections and tabbed day dividers. Just collecting the variable page formats for print and proofing files took two days and the travel journals ended up being over one hundred pages long!

As part of my work, I also designed the journal fundraising packs which contained over ten separate items. All items were branded in the same corporate styling but with various uses, from target poster, sponsorship forms, legal documentation about participation, to fun ideas for fundraising and competitions.

With any job, you never fully know what might be included as part of your role. Toy design is a completely new way of working for me and originally the mascot was to be a human, but as a true designer I asked the question why? Why couldn’t it be an animal? As the event spanned several countries and terrains, we got thinking “what if we could create a mascot that incorporated all of animals native to the roads being travelled? The traits of the mascot would represent the company’s values or strength, adaptability and team work also, and so the concept of William the mascot was born.

After discussing various playful concepts, we whittled down the concepts to create the final goat design pictured. I found that my skills in fondant modelling actually came in very handy at the next stage, as although a flat illustration can give some of the smaller details, visualising it in a three dimensional way can sometimes effect features, especially in the production of toys.  A video of all angles of the fondant model were sent off for so that a prototype ‘William’ could be created upon which the bulk order would be placed. 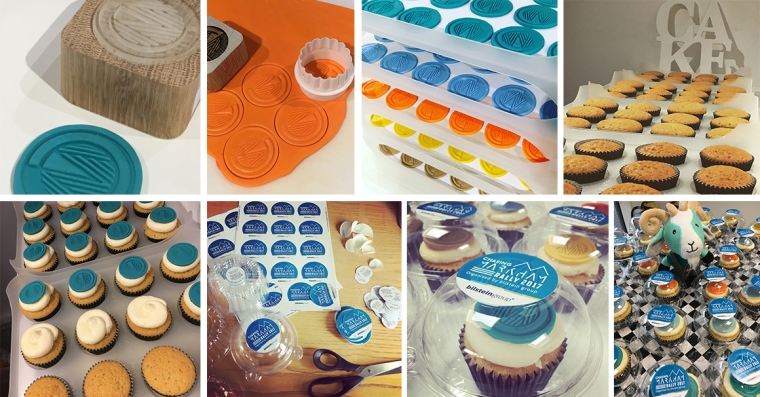 The icing on the cake for this massive multimedia project was to be asked to supply the cupcakes for the after party at the end of the event. The branding throughout had been clean and the colours were key. With two hundred cupcakes required, all to be individually boxed, the concept for the design needed to be impactful but workable on this mass production level. Using the iconic emblem from the rally, I arranged for a rubber stamp to be created so that I could make impressions in the fondant on the various coloured sugar-paste discs. The effect worked really well and meant I could bake and decorate in a reasonable time ready for delivery.

Overall, this project spanned six months and tapped into all areas of my business. I undertook work ranging from the paper products, to print media and even the baked side of things. This project was a testing one but also a very enjoyable one!

For me design is a personal thing but can be share with everyone, even if you do not consider your self a creative.

Im always in the studio or bakery doing something and i try to keep my social media channels updated so that you can see all the wonderful creations ive been working on, so come and join me…